When I was a kid my dad and I were hunting generalists. We hunted early geese in September, then moved into archery deer in October. Once regular waterfowl season opened, we hunted the creeks and fields for ducks and geese. Then came upland birds in November, followed by shotgun deer during the two seasons. When all that was over we would finish off the year hunting geese. Some springs we would head to Pike County, Illinois trying to hunt turkeys. We hunted everything Illinois had to offer in our neck of the woods, and as a kid it was an awesome time.

When I first moved out on my own I was a die hard archery deer hunter. I would still hunt waterfowl, but it wasn’t to the same degree that deer hunting was. That slowly changed as my buddy Mark, who I had known since I was a kid, wanted to hunt together. We had hunted together in high school for the youth waterfowl season, so we decided to get back to waterfowl hunting. He also told me,

“I got this friend, Ben, from school who wants to try hunting.” So thus was born the trio, and we loaded our giant goose decoy shells, small shells and silhouettes into the bed of my Ford Ranger and began our waterfowl hunting adventures. When I came home from Iraq in 2008, my passion switched from archery deer to 100 percent devotion to duck and goose hunting. I bought a five foot by eight foot box trailer and we loaded it with Bigfoot brand goose decoys. Since then we have upgraded to a 6 foot by 12 foot box trailer, 120 full body GhG goose decoys, three dozen full body duck decoys, two dozen goose shells and enough layout blinds to outfit six guys. I’ve even gotten myself further involved in getting a dog (she will have her own blog post later).

I have often questioned and also been questioned as to why I have such a drive for waterfowling. What is it about the activity that gives me such a passion that it borders on obsession? What I have found is there isn’t one factor about it that drives me, but the combination of a few factors. 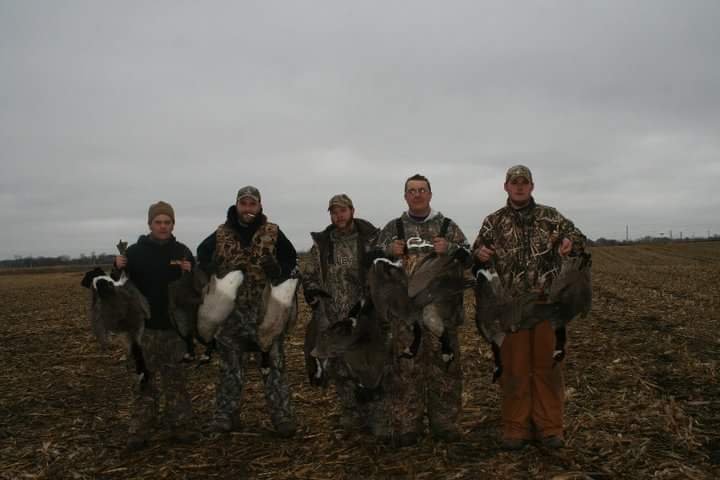 Waterfow hunting is a social activity, and great memories can be made with good friends, like this Thanksgiving Day hunt we had in 2010.

Waterfowling the way we do it with the amount of decoys and gear we have requires a few people to get it done. So the social aspect of waterfowling comes from necessity. Now, deer hunting can be a social event as well. I’ve been a part of “deer camp” quite a few times in my life, but the social part is usually in the camp itself after the day’s hunt. Generally, deer hunting itself is a solo venture, long hours spent in silent solitude, waiting for a deer to come by.

In our way of waterfowl hunting, it takes a team to get everything done in time for shooting light. Everyone has a role during set up and tear down, and if it’s our core group, everyone knows what needs to be done and gets to it. Two to three guys set up decoys, with one guy placing the stakes and the other one or two follow along placing decoys on the stakes. The one placing the stakes is usually one of the more experienced guys, knowing how to set up based on wind and other factors. One or two other guys would work on brushing blinds while the decoys are getting set up. This whole process can take us thirty minutes if we are putting out all of our 120 full bodies. The system works because we have done it so much.

The social aspect of waterfowl hunting goes beyond the work involved. Hunting with friends allows you to share the experience together, making memories as a group. Whether it was a bang up limit out day, or you got skunked, whether you swatted mosquitos while dripping sweat or shivered and froze in the cold snow, it’s an experience all went through together. Some of my fondest memories come from hunting with friends. There’s no need to be quiet while waiting for the flight, stories can fly back and forth. Discussions can be had as to the course of action as the birds close the distance, and celebrations can take place after a successful hunt. I’ve hunted by myself a few times (well except I had Lola, but she doesn’t talk much) and honestly nothing compares to time with good friends.

Nothing changes your perspective as a hunter like killing birds and having them retrieved by your own dog. This dog has a drive that does not stop while she is hunting.

One of the most amazing things in the waterfowling world to watch is a good retriever working. I’ve hunted around a few dogs in my life, and when the waterfowling bug bit me, I began to yearn for a dog of my own. I failed in my first attempt trying to make a hunting dog out of our first dog Bella (come to find out later she came from a service dog line, not a hunting line). Through unmeasurable patience and love from my wife, she allowed me to get another dog, Lola and even though it is a challenge at times having two dogs, Lola is my constant hunting companion.

Having a good retriever can mean the difference between recovering a wounded or dead bird that is hidden and potentially going home empty handed. While my early hunting life as a waterfowler was measured in how many birds I get, now I find myself more interested in seeing the dog work. A good retriever is a pleasure to watch, especially when you’ve worked with them to get them to that point. I’ve seen Lola make some amazing retrieves, which mean more to me than the number of birds I came home with.

One thing about waterfowl that really gets into my blood is how the birds finish in the spread when we have completely fooled them. You can verify this with my wonderful wife, but if I see geese or ducks hitting a field while I am driving, I have to be reminded I am driving. There is something about the grace and beauty in their movements that draws me in. Each species of ducks and geese have their own identifiable flight pattern, and how they close the distance when they want to land are as varied as the birds themselves.

Mallards can start a mile high and when they decide they want in, they almost touch their wingtips together and drop like a rock. Canada geese can almost flip upside down to lose air in their wings, what hunters term “maple leafing” because they look like leaves falling from the sky. They do this to close the distance fast when they are higher in the sky. They can become very noisy on approach and that to this day makes the hair stand up on my arms. Wood ducks seem to scream in at full speed, and seem to make last minute decisions to the point they appear to come close to crashing. Teal are called little fighter jets because they have one speed and it’s fast. Each of these flights and the bird’s behavior keeps me coming back for more.

Our first snow goose hunt in Colorado in the spring of 2010 was a hunt unlike anything I had ever experienced before.

Sharing a blind with family and friends, plus some “jewelry” for my cousin Colton, makes for an awesome memory.

Bag limits should not be the final measure of a successful hunt, but it sure is nice when a plan comes together. All smiles for us after this late season goose hunt.

All in all, the preceding topics add up to the main reason waterfowl hunting is such a passion for me; the memories made while in the field. I have had some great gut busting laughs, some frustrating days that almost bring me to tears, and every emotional experience in between while hunting. I’ve drug my dad in his wheelchair through a muddy field in the rain so he could hunt. I’ve hiked in decoys, blinds and gear when I’ve sworn that after the service I would not hike a heavy load, which led to one of my most memorable hunts I’ve had. I’ve frozen, sweated, cursed and celebrated, sworn I was done just to go back the next morning, because the experiences and memories can’t be found anywhere else. I’ve seen nature come awake, seen nature go to bed, experienced beautiful sunrises and equally breathtaking sunsets that any other hobby wouldn’t have shown me. The memories made while waterfowling is a driving factor as to why I do it season after season. When the weather turns cooler, and the birds start moving, I begin to feel like a kid at Christmas waiting for the opening weekend. Those are the reasons why I love it, and if any of them lose their meaning to me, it will be time to hang up my calls. Lucky for me, I don’t foresee that for a long, long time.